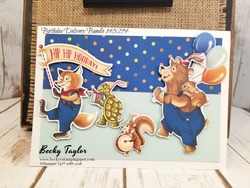 T his is the card I made for my grandson's 5th birthday. He had requested a game called "Catch the Fox" so I wanted to make him a card that fit his request.